We may be heading towards the gloom of winter – but it seems mortgage lending is warming up according to the Council of Mortgage Lenders (CML).

The latest report shows that both housing and mortgage markets picked up over the summer months, with mortgage lending currently enjoying it’s best spell since 2008. According to CML, lending reached £20 billion in September – that’s two percent higher than August’s lending of £19.7 million – and represents a 12 percent increase year on year.

CML reported: “Gross lending in the third quarter of 2015 was therefore an estimated £61.4 billion. This is 18 percent higher than the £52.2 billion advanced in the second quarter, and an increase of 12 percent on the third quarter in 2014, when lending totalled £55 billion.”

CML economist Mohammad Jamei said: “Mortgage lending is currently enjoying its best spell since 2008. As we expected, the second half of 2015 has seen a pickup in activity in the housing market after a slow start to the year. Low inflation, strong wage growth, falling unemployment and competitive mortgage deals are all helping to support housing demand.

“We expect to see further modest growth towards the end of the year, although affordability pressures are likely to limit gains for home movers and first-time buyers.” 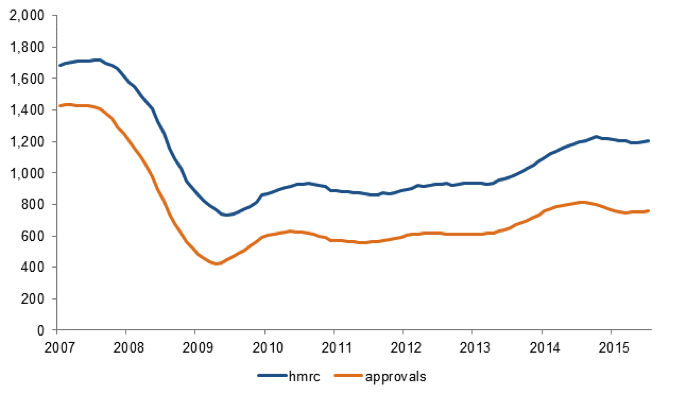 Buy-to-let mortgage applications could get tougher with EU directive

However, there may be some dark clouds on the horizon for those wishing to rent their properties. From Spring 2016 potential landlords may find it more difficult to apply for a buy-to-let mortgage as a new EU directive comes into force.

Aimed at protecting “accidental landlords”, who may be viewed as consumers rather than professionals thus needing greater protection, the new application guidelines could see similar regulation as residential mortgages.

This would mean that rather than lenders looking at earning potential or rental yield, as they do currently, to determine the amount they’ll lend, they will be required to adopt income-based applications similar to those used for residential mortgages.

Henry Knight, Director, Springtide Capital commented: “As CML have reported, the prospects for the UK’s economy may look benign but the prospects for lending look very promising. We have seen consistent improvement in our business volumes throughout 2015 and this has continued over the summer period. This, coupled with the increases we’ve seen in loan sizes, is making me feel positive about the strength of the housing and mortgage markets in the UK. However, we need to be realistic about the potential impact of next year’s proposed EU directive on the market. This, in addition to the recent tax changes, could make BTL a less attractive option, potentially slowing down the rate of growth.”